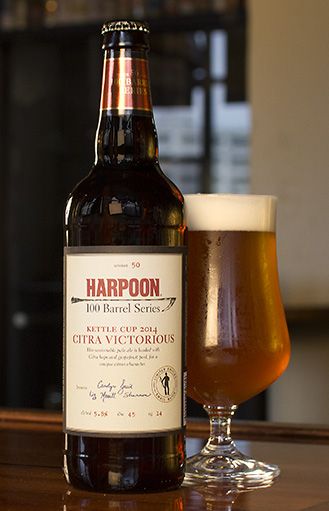 Several years ago a few Harpoon employees thought it would be fun to start up an annual company homebrew competition here at the brewery. Anyone who wanted to brew a beer could, and the winning beer would be determined by popular vote based on a blind sampling at our annual company outing at our brewery in Windsor, VT. The first year there were about a dozen entries from Harpooners in every department. In 2013 there were more than 30. The winning beer is now brewed as a 100 Barrel Series offering. So, after a heated contest, Harpoon Citra Victorious, brewed by Merrill Allen, Jessie Cox, Shannon Cudmore, Liz Melby, and Carolyn Orth, under the guidance of brewers Charlie Cummings and Brian Martyniak, came out…well, victorious. Congratulations to this year’s Harpoon Kettle Cup winners!

Citra hops provide a juicy citrus character while Chico yeast yields a fruity aroma in this grapefruit-infused pale ale. The combination of Maris Otter, Pale, and C60 malt adds depth and a touch of sweetness and gives the beer its rich bronze color and medium body.  The finish is all citrus.  Dry hopped with Citra and Cascade and loaded with 96 pounds of grapefruit peel, Harpoon Citra Victorious is easygoing with a momentous citrus kick.