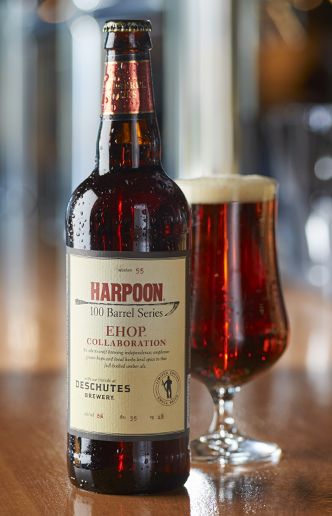 In 2014 we became employee owned and our friends from Deschutes Brewery were among the first to welcome us to the ESOP (Employee Stock Ownership Plan) club. They became an invaluable resource for us as we began to navigate our way into the new world of employee ownership. As you can imagine, it didn’t take long for us to decide to brew a beer together.

Two versions of the EHOP beer will be released: one brewed at our brewery in Boston and the other brewed at Deschutes in Bend, Oregon. Harpoon brewer Ethan Elston and Deschutes brewer Ryan Schmiege collaborated on both recipes. While each beer is unique, both recipes include employee-grown hops (EHOPs). The hops, along with locally sourced sage and thyme, create a full bodied amber ale that has a malty sweetness and a lingering spiciness. Both versions will be bottled and kegged for a release in Mid-Late October. Cheers to craft brewing independence!

Learn more about Deschutes’ version and where you can find it.