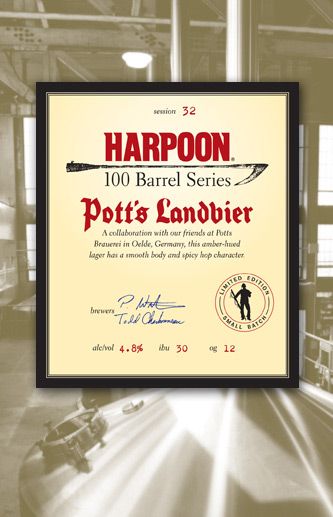 This beer, the 32nd in the series, has was inspired by our friend Joerg Pott of Pott’s Brauerei in Oelde, Germany. Pott’s master brewer, Peter Wienstroer, collaborated with Harpoon’s Todd Charboneau to brew this beer.

The origins of this beer go back to 2003 when a group of German brewers, including Rainer and Joerg Pott of Pott’s Brauerei, took a tour of American breweries that included Harpoon. A few years later in 2007 Joerg joined the Harpoon staff for the summer months to learn more about American craft beer.
During Joerg’s 3-month tenure at Harpoon, the idea of brewing a beer together was mentioned often, but the timing never quite seemed to work out– until now.
Pott’s Landbier, or “country beer,” is a traditional session lager with a decidedly malty backbone made up of a blend of German and North American malts. The smooth malt character is tempered by the German bittering hop Magnum, which lends a clean, crisp balance. This beer is finished with more German hops for a spicy herbal palate and aroma. Fermented with Pott’s proprietary lager yeast – and imbued with over 240 years of German brewing tradition — this is just the beer to quench your summer thirst.