The 31st offering from the Harpoon 100 Barrel Series is the Single Hop ESB, brewed by Harpoon brewer Charlie Cummings. Already excited about crafting an Extra Special Bitter, Charlie jumped at the rare opportunity to brew this beer using one hop varietal, Delta, exclusively throughout the process.

The Delta hop is a brand new American-grown hop developed by Hopsteiner. In fact, the Harpoon Single Hop ESB is the first beer in the world to be commercially brewed using the Delta hop. A cross between Fuggle and Cascade hops, Delta hops yield an unrestrained earthy/floral aroma and taste that compliment the rich flavors of traditional British malts and yeast.

The recipe for this beer is a nod to the beloved Harpoon ESB, which was last brewed in 2002. However this version uses imported ingredients, except for the domestically grown Delta hops. Only a portion of the batch was filtered, leaving the full spectrum of flavor and aroma of this special new hop to enjoy. 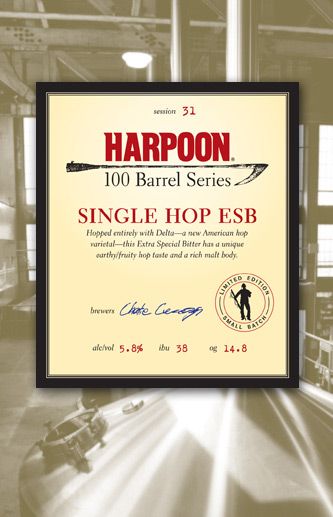