It all started in 1986. Sure, many things have changed since the early days of Harpoon, but much has stayed the same. We still love brewing beer and enjoying it with friends. Below are a few highlights and some of our favorite memories from the past 30 years! 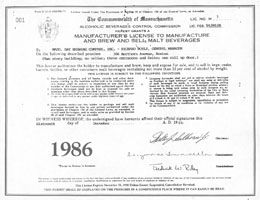 It all started with three college buddies and a shared love of beer.  Dan Kenary, Rich Doyle, and George Ligeti were passionate about beer, but they weren’t able find what they were looking for on tap at their local pubs.  While traveling in Europe after college, they drank many diverse, fresh, local beers and experienced firsthand the wonderful beer culture that existed just across the pond.

They wanted to bring that to Boston, so they decided to do just that. In 1986 the Harpoon Brewery received Brewing Permit #001 in the Commonwealth of Massachusetts.
And that, friends, was the beginning of Harpoon….

We had the building, brewing equipment, and a bunch of people who loved to drink beer….now we just needed someone to come and actually brew the beer. Enter Russ Heissner, a graduate of the UC Davis School of Fermentation Sciences. Russ started formulating the recipe for Harpoon Ale in the summer of 1986.  Friends and family were the lucky (and, at times, unlucky) quality control team through many months of test batches.  Finally, in June of 1987 the “original” Harpoon Ale was brewed and delivered to Harpoon’s first accounts; the Sevens Ale House on Charles Street and Doyle’s Café in Jamaica Plain. And the rest, as they say, is history. But read on for more anyway.

A couple year’s later, we did another Harpoon “first” – Harpoon Octoberfest! When we decided to throw our first Harpoon Octoberfest at our brewery in Boston, it was considered a bit of a Hail Mary pass; times were tough and it wasn’t clear if we would be in business another year.  We had always wanted to host a festival at the brewery as an ode to the great Munich fall festival, so we thought this would be one last hurrah. Much to our delight (and surprise!), the crowds rolled in.  In fact, there were so many people, we had to call family members to come help pour beer! The party continues to this day, with Harpoon Octoberfest festivals at both of our breweries, chicken dancing, oompah bands and all. 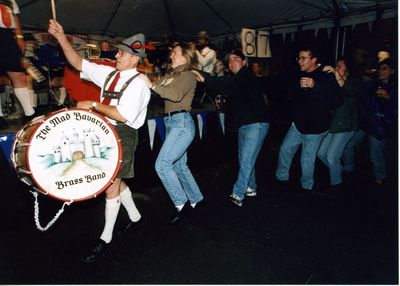 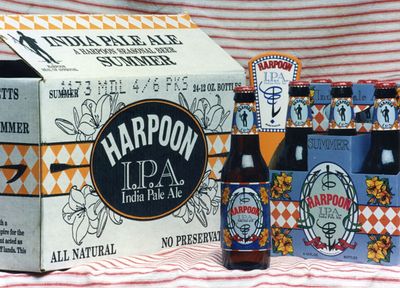 It’s hard to believe these days, but back in the early 90s, IPAs weren’t as ubiquitous as they are now. In fact, there were very few brewed on the east coast. In the early 1990s, hoppy Pale Ales were being brewed in the Pacific Northwest and California but there were no craft beers being brewed in the rest of the US that featured high aroma content from Northwest hops. Harpoon IPA was a very extreme beer for 1993. Would beer drinkers be ready for the hoppiness of an IPA? ….YES.  Instead of shying away from the hops, beer drinkers embraced them. Our IPA quickly became our bestselling beer and flagship. It made the brewery it is today.

Then in 2000, we purchased the former Catamount Brewery in Windsor, VT. The craft beer fire was catching, and we continued to grow at a rapid pace. Our digs in Boston could no longer accommodate the insatiable thirst of New England beer lovers. We were brewing at full capacity at our facility in Boston – 24 hours a day, seven days a week – but we continued to struggle to keep up with the demand for Harpoon.  As luck would have it, an incredible opportunity came our way – a beautifully constructed relatively new brewery built by the Catamount Brewery, another pioneering New England craft brewer, went up for sale.  In June of 2000 we became the proud owners of a new, state-of-the-art brewery in Windsor, Vermont. We still brew some of the Catamount beers from time to time – be sure to follow us on social to learn more about these special releases!

Love Beer. Love Life. is our motto, and we try our darndest to live by it every day. The annual Harpoon 5-Miler is the perfect illustration of our motto. Our first race was May 2001 and since then, every year we have close to 5,000 runners jamming out 5 miles around our brewery in Boston, ending at the brewery for some beers to celebrate. The best part is that the run benefits an organization that is near and dear to our hearts, The Angel Fund. Since we started the 5-Miler, we’ve raised more than $1,300,000 to support their cause in finding a cure for ALS. A little exercise, followed by beers, while raising money for a truly worthy cause. That’s Love Beer. Love Life.

Harpoon5-Miler’s success proved one thing: beer lovers are good people. At least the ones we know. So, we decided to start a program that harnesses all this goodness and to give back to our community. Harpoon Helps was created in 2003 to organize our community outreach. Our mission is to support local charities throughout our distribution footprint with donations of fresh Harpoon beer and volunteer hours, and by raising money for organizations through events. Harpoon Helps produces 6 fundraising events throughout the year. Harpoon Helps is something that we’re very proud of here at the brewery. Other than brewing great beer, being a good neighbor ranks high on our “To Do” list. 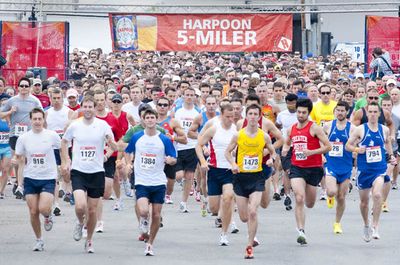 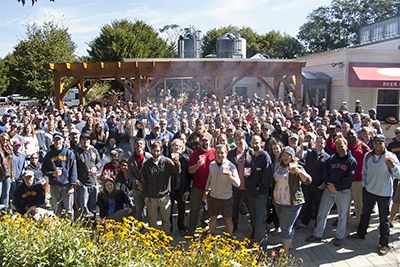 Some people think we walk around Harpoon like we own the place. Well, that could be because we actually DO own the place. In July 2014, Harpoon became an employee owned company, with 48% of the company given to employees through the establishment of an ESOP. An E-what? ESOP stands for Employee Stock Ownership Plan. It is a mechanism by which a company contributes to its employees’ retirement by allocating shares to them which it repurchases…..yadda, yadda, yadda… Here’s what it means: we are employee owned, we are an independent craft brewer, and you bet we’re damn proud of it.

With our 30th anniversary right around the corner, we decided it was time for our logo and our look to evolve. While there had been tweaks to the Harpoon look over the years, this was the first complete brand refresh in Harpoon’s history. Harpoon IPA was the first to be refreshed, and slowly but surely the others followed suit. It’s cleaner, bolder, and does a better job of telling the Harpoon story. Change can be tough, but we love it – especially the beer inside. 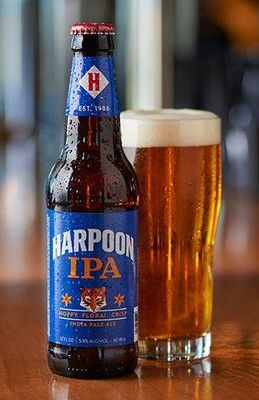